Are you ready to taste some mouthwatering Korean BBQ recipes? This post has everything you need to know.

One of the best things about studying the Korean language is learning about different aspects of the culture. What better way to learn some Korean vocabulary than sampling some delicious Korean delicacies?

What Does Korean BBQ Consist Of? 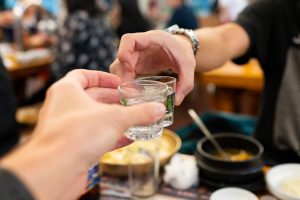 Korean BBQ is a bit different from American BBQ in that the term refers mostly just to the concept of grilling meat – it doesn’t have anything to do with the sweet, sticky barbeque sauces we tend to focus on in the United States.

Some key features of this style of barbeque include:

There are dozens of dishes you could try, but some common ones include:

Some types of food served in this type of cuisine are marinated. For example, bulgogi is always marinated before cooking with a combination of ingredients like sugar, soy sauce, scallions, ginger, garlic, pepper, sesame oil, and more. Sometimes, fruits like pineapple and pears are also used to tenderize the meat.

How to Make Korean BBQ 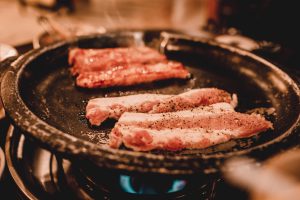 Before you eat, or the day before you know you want to eat this kind of food, take some time to marinate the meats and prepare the vegetables. You don’t have to marinate meat for this kind of cooking, but it will result in a more flavorful experience.

When you’re ready to fire up the grill, make the noodles, rice, or other side dishes first. Get the table set up and heat up your grill (you can also use a hot plate).

The best kind of grill will be a charcoal grill, since it lends the best taste to meat, but it’s not safe to use indoors. An induction cooktop is safe to use, as is a propane butane stove as long as you have proper ventilation.

Regardless of the type of grill you use, it’s a good idea to keep a window open while you’re making your food so it doesn’t get too smoky inside.

Brush a bit of oil on the grill so the meat doesn’t stick. As soon as the grill is hot, you can add the meat and cook, flipping them as needed.

Once the slices are cooked through (the time will vary depending on the type of meat you are cooking), you can remove them from the grill, wrap them up, put some sauce on, and eat with your side dishes.

The best slices of meat will be flanken cut short ribs (which are cut thin across the bone) and things like ribeye, sirloin, and brisket. You can also cook pork belly, pork jowl, or chicken thighs.

What Korean BBQ Sauces Should I Use? 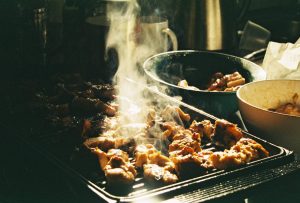 Again, not all Korean barbeque recipes call for marinating the meat beforehand. However, the sauces can make your meal even more delicious.

What is Special About Korean BBQ? 15 Recipes to Try 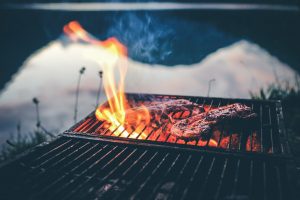 Here are 10 Korean BBQ dishes you have to try. 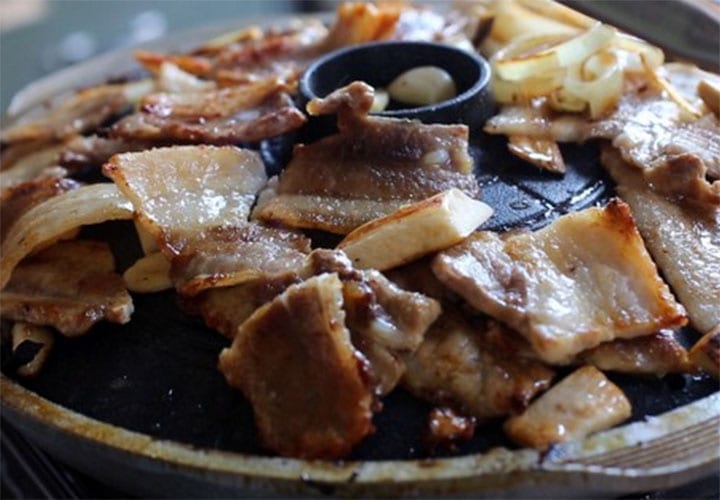 At most Korean restaurants, grilled pork belly is made with garlic and green onions. You can cook it at your table, and enjoy salad and vegetables on the side.

You can try grilled pork belly at just about any Korean BBQ restaurant, or make your own with this recipe. 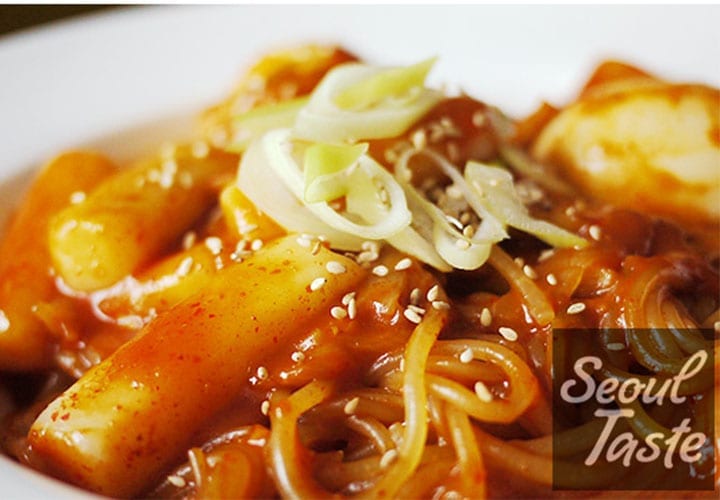 Don’t let the name intimidate you, ddeokbokki are essentially spicy Korean rice cakes. There are many different ways to make them, but they usually contain fish cake, cabbage, and hard-boiled eggs.

Want to try to make this dish yourself? Get the recipe here. 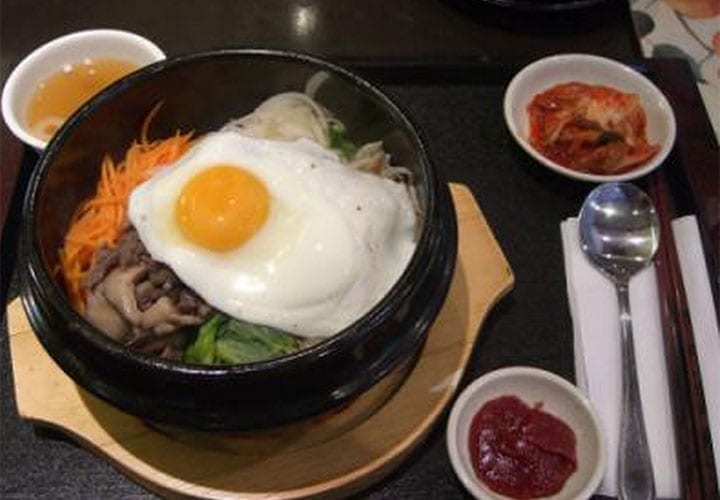 Bibimbap is a bowl of steamed rice with an assortment of toppings. You can add meats, vegetables, or a fried egg, and then top the bowl with a spicy soybean paste called gochujang.

Find a Korean BBQ restaurant near you, or make your own bibimbap. 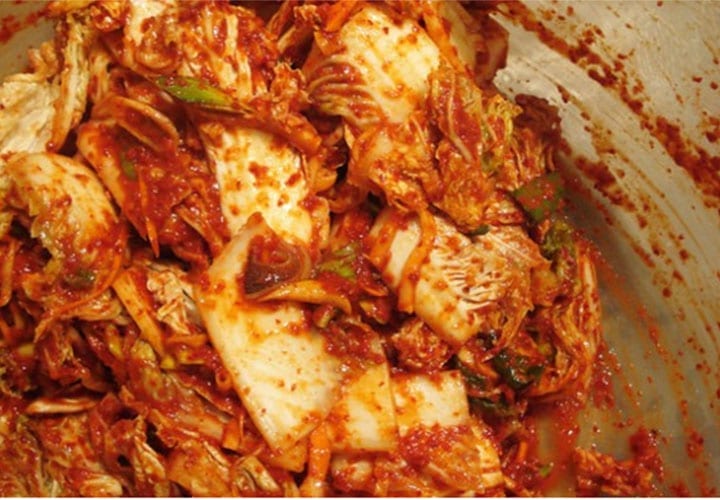 Kimchi is a staple and a popular Korean BBQ side dish. Kimchi is made either from seasoned vegetables or cabbage, and it can be made spicy or mild.

If you make your own kimchi, you can customize the ingredients and the spice level. 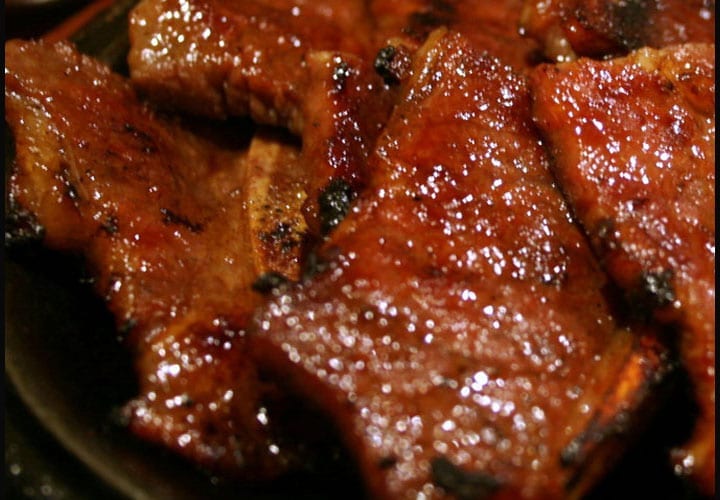 These beef short ribs are marinated in garlic soy sauce. They’re grilled to order at Korean restaurants like Sura KBBQ, and served on a skillet with a bed of onions. 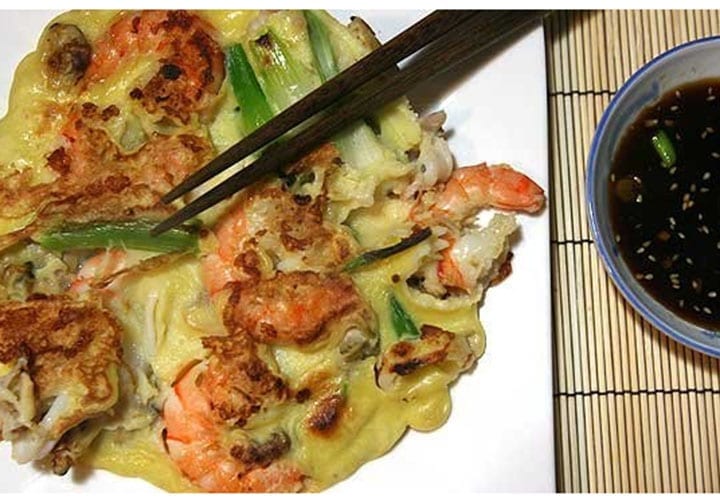 photo from the kitchn

Korean seafood pancakes, or haemul pajeon, contain your choice of seafood with scallions wrapped in a batter-based shell. Pair it with the dipping sauce of your choice and some soup, salad, or kimchi.

You can try different types of haemul pajeon at various Korean restaurants, or invite your Korean language study group over for dinner and make your own! 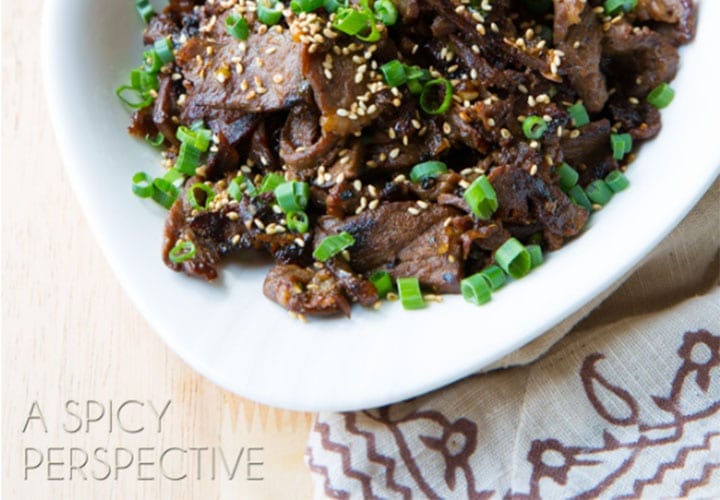 photo from A Spicy Perspective

Learn more about how to make bulgogi here. 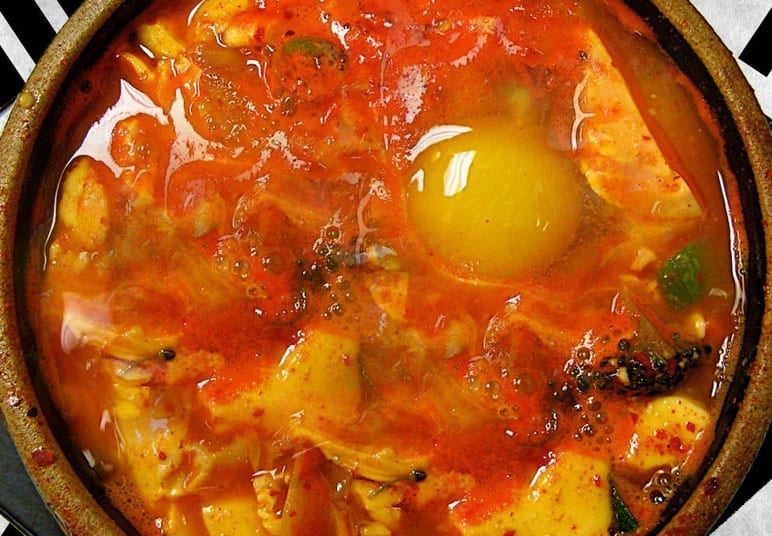 Soon Doo Boo, or soft tofu soup, is a popular Korean dish. You can customize the spice level and order a vegan-friendly or beef broth. Add toppings like pork belly, beef, kimchi, jalapeno chicken, or mushrooms. 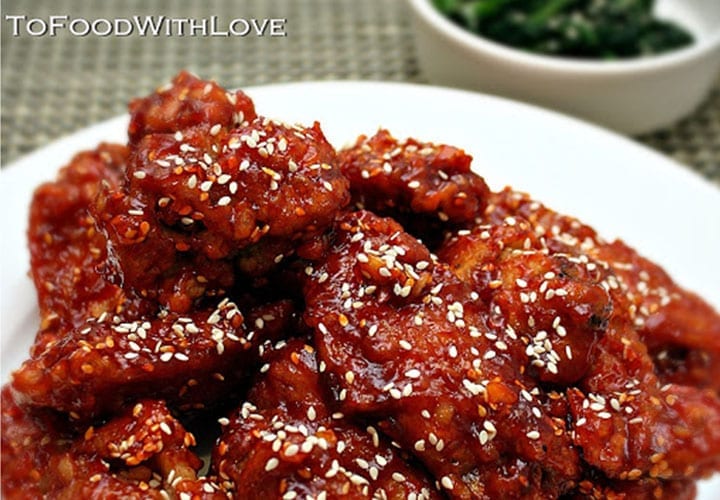 photo from To Food With Love

Yangnyeom tongdak is Korean fried chicken. The chicken is deep fried and then covered in a sweet-and-spicy sauce. The added gochujang gives the chicken a spicy kick, so you may want to try a different entree if you’re not a fan of spicy foods.

Find a Korean BBQ restaurant near you, or learn how to make your own yangnyeom tongdak. 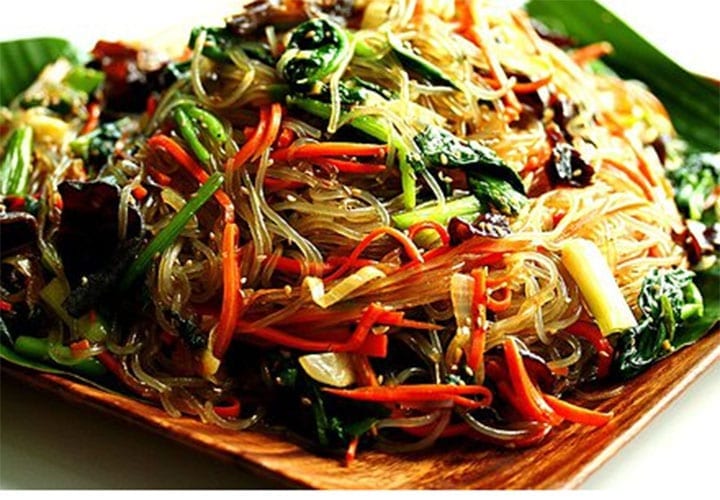 Try these sweet potato noodles that are mixed with vegetables like spinach, carrots, and onions. The noodles turn clear when they are cooked, which is why this dish is sometimes called “Korean glass noodles.” Some Korean restaurants also add beef to their jap chae.

Want to try jap chae? Get the recipe here.

5 More All You Can Eat Korean BBQ Recipes 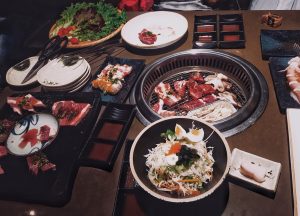 Here are a few more Korean BBQ recipes to try.

This grilled chicken recipe isn’t the most common one you’ll find at Korean BBQ restaurants. However, it’s worthy of a mention on our list of the most delicious.

It includes a marinade with ingredients like ginger, garlic, soy, and sweet malt syrup. You can even add a bit of lemon juice, if you choose! Here’s a simple recipe to follow.

Korean BBQ chicken might be your go-to – but if not everyone is a chicken fan, you’ll want to give this recipe a try instead. These succulent skewers are made with thin slices of beef that are marinated ahead of time in rice vinegar, soy sauce, garlic, Sriracha, and sesame oil. Then, you slide them onto skewers and grill them (ideally over charcoal).

Here is a recipe.

Here’s a simple recipe for basic barbeque sauce that you can use for all of your favorite recipes. It includes main ingredients like soy sauce, Asian pear, chili garlic sauce, dark brown sugar, and, of course, soy sauce.

This is where you’ll find the recipe.

Chicken wings aren’t the most common concoctions in Korean BBQ, but that doesn’t mean they don’t have a place on your own dinner table! These delicious wings are made with sweet and savory marinade ingredients like red pepper paste, honey, soy sauce, and sesame oil.

Ok, so this isn’t a traditional recipe- and there are probably some diehards out there that will resent us for mentioning it!

But the reality is that most of us are busy –  and it’s not fair for us to have to forgo the deliciousness of Korean barbeque just because we don’t have the time to fit grilling into our busy schedules!

Instead, this recipe for cooking barbeque in a crockpot is absolute genius. It’s cooked slow for more than six hours – and while the taste isn’t quite the same as traditional barbeque, it comes in as a close second.

Give the recipe a try here.

What’s the Difference Between BBQ and Korean BBQ? 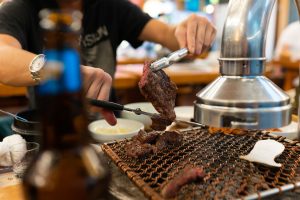 Of course, the way in which the dishes are prepared is different, too. In America, the “grillmaster” is often tucked out of the way, cooking on a grill behind the home while sipping a beer in solitude. That’s sometimes true in Korea, too, but it’s far less common.

In Korean barbeque, the grills are often built right into the table. Korean barbeque is a highly social experience, with all diners taking part in the preparations. Check out this video to see what it’s like to eat at a Korean barbeque restaurant!

The side dishes vary, too. In the United States, our favorite BBQ accompaniments include things like macaroni and cheese, macaroni salad, cole slaw, corn on the cob, and cornbread.

In Korea, the most popular side dishes for barbeque include kimchi and rice – or perhaps a fresh vegetable dish. Much healthier!

One thing Korean and American BBQ have in common? Both kinds of meals are frequently served with alcoholic beverages, like beer or wine. Now that’s something to get behind!

Now that you know some of the most popular dishes, find a Korean BBQ restaurant near you and sign up for online Korean lessons so you can communicate your dining preferences well!

Bring a group for a fun dining experience, and enjoy some delicious food while you practice your Korean language skills.

Want to learn to speak Korean? Search for a Korean teacher near you!